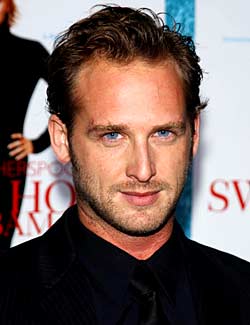 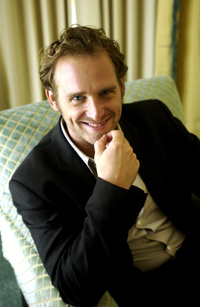 Wow, wherever to begin? This opening paragraph has taken me, like, two hours to write, and I still think it sounds stupid. But I just have no idea how to even begin discussing my relatively-recently developed crush on this week's Boyfriend, Josh Lucas. He's totally taken me by surprise and completely knocked me off my feet.

I guess the best way to go about this is using the scientific method. You know, go through the subject bit by bit, analyzing and describing its characteristics and functions. I'll spare you the convoluted "significant figures" rules, since I never got those down myself, but I think taking a logical approach to the whole thing will make this write-up a lot easier for me. Otherwise, it's going to be twenty paragraphs of me going, "argh! His eyes! argh! His smile!" And that's no way to write an essay. Unless you're in third grade and you have to use up 15 more words in order to pull your count up to the required 150 or something. Then a few well-placed "arghs" can really save you some trouble.

Anyway, let's start at the bottom and work our way up.

So, there you have it. My scientific analysis of why I like Josh. Though, I suppose, in retrospect, it's not actually all that scientific. But it's certainly orderly, and that's close enough for this librarian.

Now, wouldn't it be funny if I now took all those pieces of Josh and spliced them together to make a full-sized Josh being? Yeah, I thought it would be really funny too. So I did. He's going to hate me if he ever sees this, though. So, just in case, here's a message for Josh: sorry 'bout that! Couldn't resist!

Okay, but before we get too carried away with Josh's technical specs, let's take a look at his operating system. Namely, his voice, and his talent.

First the easy one: have you EVER heard a voice as seductive as that one? I mean, I've always had a weakness for Southern charm -- it goes back to my days as William Faulkner's best gal. Well, his muse anyway. That man could charm the ladies, I tell ya! (Okay, actually, that's not true. Not any of it.) But even ordinary cute Southern charm (see Matthew McConaughey) does not hold a candle to Josh Lucas's special brand of Southern charm, which I'm hereby trademarking as thus: Josh Lucas's Downhome Southern Charm (TM). And yes, I do think that has something to do with the aforementioned grin and dimples. But it's also just the quality of his voice. Its playfulness and its resonance. I could listen to that guy talk about hound dogs ALL DAY, I swear. And not only would I never get tired of it, I'd hang off his every word. FOREVER.

But even better is how versatile Josh is proving himself to be as an actor. Sure, like many of you, I didn't really "discover" him until "Sweet Home Alabama," in which he plays a devastatingly Downhome Southern Charmer (TM) with a set of dimples and a grin that brings you to your knees. (Or, as the great Leonard Cohen might have said if he was gay instead of straight: "I have often prayed for Josh like this/ Let me have him.")

But, when I looked him up on the IMDB a few weeks ago, I was surprised to see how many of his movies I had actually already seen. So, I rerented a couple of those, and then rented a couple of new ones on top of it. Of the set, I think my favorites were probably "When Strangers Appear," a thriller (which had me guessing almost the entire time, something I truly appreciate in a thriller), "The Weight of Water," a drama about an old island murder and its effects on a group of people who have set out to photograph the location of the killings, annnnd "The Deep End," which also features hottie Goran Visnjic, thus making it a movie full of men with dimples that I cannot resist.

I also really enjoyed "Sweet Home Alabama," if only for the quality of the D-S Charm (TM) and the presence of a really good hound dog. And also, no matter how lame this is, I still think Patrick Dempsey is really cute.

The other movie I saw, which I had also seen before, was "Session 9," a horror movie about a set of construction guys working on an old insane asylum that ends up being haunted. This movie is only so-so, but it does have a few shots of Josh Lucas without a shirt on. Of course, he's got a stake through his eye, but we can't be too picky about these things, can we.

And before you all email me with this information: I know, I know, he's in "A Beautiful Mind" too and I'm lame for STILL not getting around to seeing that. But, you know, I can only watch just so many movies when I'm doing research, and, well, "Session 9" won out just because I really like extremely bad movies. Given the choice between an extremely bad movie and a movie that's won 17 Academy Awards, I will always go with the bad one. Unless the Academy Award one stars Adrien Brody. But let's not get too far ahead of ourselves with that (hint hint).

A little background on Josh: He was born on June 20, 1971 in Arkansas. His father was a doctor and his mother was a nurse. Both were political activists and they moved around more than a dozen times before finally settling in outside Tacoma, WA (woo! a local boy!).

In high school, when he first started to get into acting, he won several dramatic literary and debate competitions, relying, I'm assuming, a great deal on the D-S Charm (TM) thing. Because who could resist, I ask you? Eventually, he decided not to bother with college and went straight into his calling -- stardom -- by moving to California and quickly diving into television roles and movies.

In 1993, he made his first foray into feature film acting as one of the rugby players stranded in the Andes after the plane crash in "Alive." His next role, in the TV movie "Class of '61" so impressed people in the biz that he was quickly asked to star in the television series "Snowy River: The McGregor Saga." For a number of reasons, though, he quit the series after only one year.

Back in the states, he started playing a lot of bad-guy roles, something he's very good at. It's got something to do with his charm and the way it makes you like him -- because then when he turns out to be an ax murderer instead of a sweetie, you are both surprised and thoroughly horrified. I like that in a man. Well, I mean, not the ax murderer part. The "not quite what they seem" part.

Up next for Josh are roles in the movies "The Hulk," about, well, The Hulk, where he'll play Major Glenn Talbot; and a film called "Wonderland," a thriller about famous porn star John Holmes and his involvement with a series of murders in Laurel Canyon in 1981. Ex-Boyfriend Val Kilmer stars as Holmes, with Josh playing one of the victims. I have shivers already. But at least he's not playing the bad guy again this time. Or maybe I don't mean that. Because dang he looks good when he flips from charming to devious. And he's so masterful at it, too!

But anyway, if you have agreed with my analysis of Josh Lucas, in which I have attempted to offer up a theoretical basis to address the question, "Why is he so cute?," check out some of the movies I mentioned above -- I think you'll not be disappointed. And, of course, please feel free to take my extensive research on this subject, pirate it, and publish it under your own name.